Have you seen these new bright green and yellow bikes hanging around every corner downtown? What are your opinions on them? Do you think it’s good for the community? 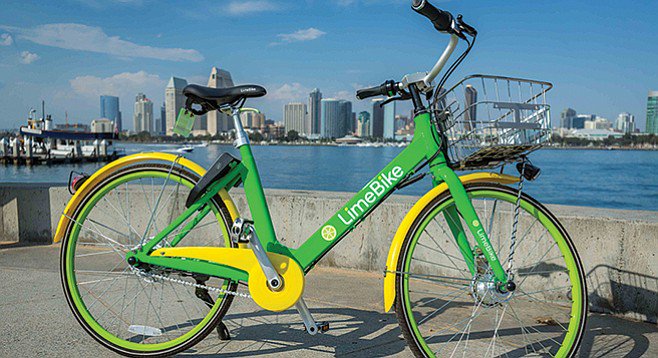 Within a few days of launching their dock less bikeshare company, there has been some issues stirring in the community. On March 8, 2018 representatives from Lime Bike and Bird attended the East Village Association meeting located at the San Diego Central Library. The meeting was voiced from two different viewpoints: those in favor for an alternative option for transportation and those who were against the sudden appearance of these bikes being distributed everywhere.

Most people can agree that the more people that choose to ride bikes instead of driving their car will help reduce the amount of CO2 emission into our economy. This will reduce a small percentage of global warming and help our environment. It also makes it convenient for people to travel to their destination without polluting the air. Although it’s documented that the city wants to go green, there are more negatives views about the bike share than there are positives.

Luke Vinci, President of Global Strategic Management Institute, wrote a letter to Council Member Chris Ward saying, “I am sure you are aware bikes and scooters have shown up all over the place in the public right of way (PROW) of Little Italy”. He’s upset that the bikes are taking up public space and wants the city remove the dockless bikes. While others want the city to at least implement stricter rules such as having actual park destinations where the bike share companies will have to pay for.

Local business owners are upset that the bikes are blocking their entranceways. During the meeting, an angry business owner said, “your bikes just line up in the back of our kitchen door… So we called your company to kindly ask you to relocate them, and they were like ‘There’s nothing we can do.”

The biggest concern I believe that was presented at the meeting was that the homeless have access to the bikes, which was a scare for many due to a recent Hepatitis A outbreak here in downtown San Diego. With heavy contact on the handlebars, it increases the possibility of another outbreak occurring.

It’s your choice if you want to use the bike share program, just make sure that you always wash and sanitize yourself on every ride and please park the bikes away from public right of way. There may be a new designated bike station in the works, but we will have to wait and see what the city plans.